One night in April, 2007, the beautiful city of Melbourne, Australia was host to a small gathering of sound-lovers and curious passers-by descending on the venerable Northcote Social Club for a night of subtle soundscaping by Oz-natives Solo Andata and Seaworthy and New Yorker Taylor Deupree, who was in Australia for a tour. After a great meal and despite the ghosts of the BBC hijacking the audio system, the three artists set out to capture the focused listeners with beds of abandoned melodies and warm acoustic tangles.

In hopes to capture the memories of the night, and a snapshot of live audio and all of its imperfections, Deupree recorded the evening with the intent of producing this cd. Live in Melbourne pairs labelmates Seaworthy and Deupree with Solo Andata, anewcomer to 12k, who all share in a similar sonic aesthetic.

Solo Andata performed with laptop and a host of small instruments and electronics creating dense and careful beds of disjointed, yet beautiful music. Seaworthy transformed the stunning, sparse drones of his Map in Hand album into a live, improvised experience that captured all of the emotion that’s created by a single musician and his guitar. Deupree rounded off the night with his characteristically sparse bed of tones and digital detritus. 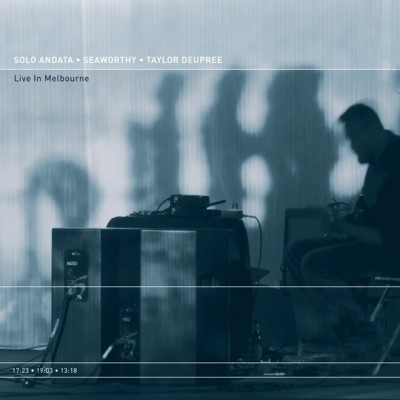